I have installed a small (approx. 4000 litres) inflatable pool for my boys in the yard which is used in the Summer months i.e. between June and September.
The pool is exposed to direct sunlight during the morning/early afternoon hours, approx. from 09:00 till 14:00. This would be enough to heat the pool water, however in Summer I cover the yard (and therefore the pool) with shades to reduce the heat inside my house. The problem with shading is that the pool doesn't get heated well anymore and the water can get quite cold, enough for my boys to start feeling cold.
I used to replace some of the pool water on a daily basis by dumping some of the pool water in the grey water tank and replacing it with warm water from the solar water heater, however this year I have a better solution.
I build a small flat plate collector (50cm x 54cm) with a 15 metre 1/2 inch copper pipe inside the collector, all painted matt black. Then I've covered the box with non reflective glass. The theory behind is that I'll be looping the water from the pool through the solar collector, the water gets heated in the process (it will absorb the heat from the collector) and is then dumped back in the pool. The collector is a small one and therefore the pool water can never reach a temperature high enough to scald the boys, however it should be enough to warm the pool water to a more comfortable temperature.
The size of the collector was something which I had little control over simple because it has to be installed in a tight/small space. In theory, at any moment, the sun emits about 3.86 x 1026 watts of energy. Most of that energy goes off into space, but about 1.74 x 1017 watts strikes the earth. (ie: 174,000,000,000,000,000, or 174 quadrillion watts).
If there are no clouds, then 1 square meter of the earth will receive about one kilowatt of that energy.

The image below is showing the underneath of the solar collector box. I have painted it in gloss white and it will be positioned on a 40mm steel pipe. 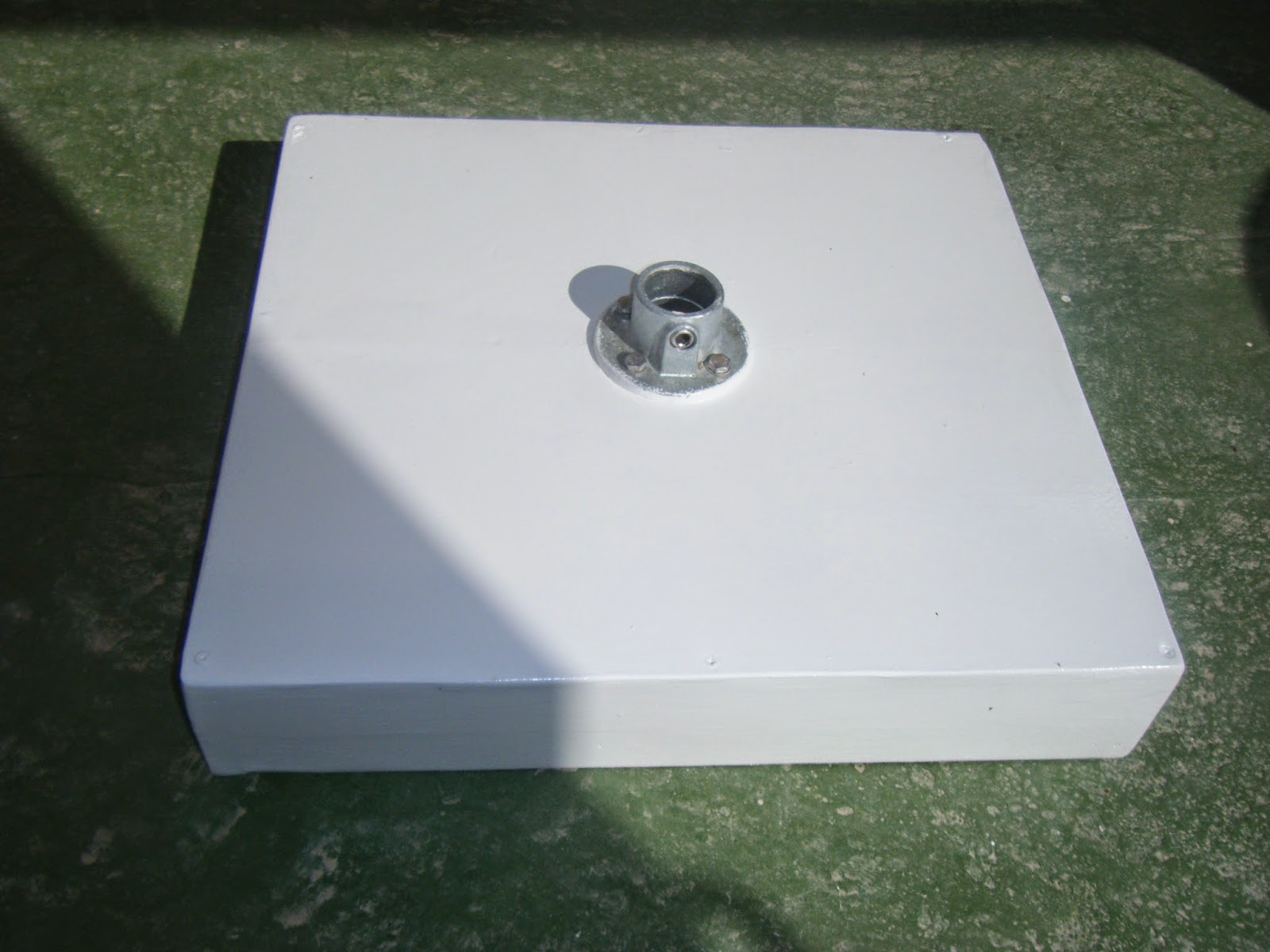 Below is an image of the inside of the solar box, painted matt black. 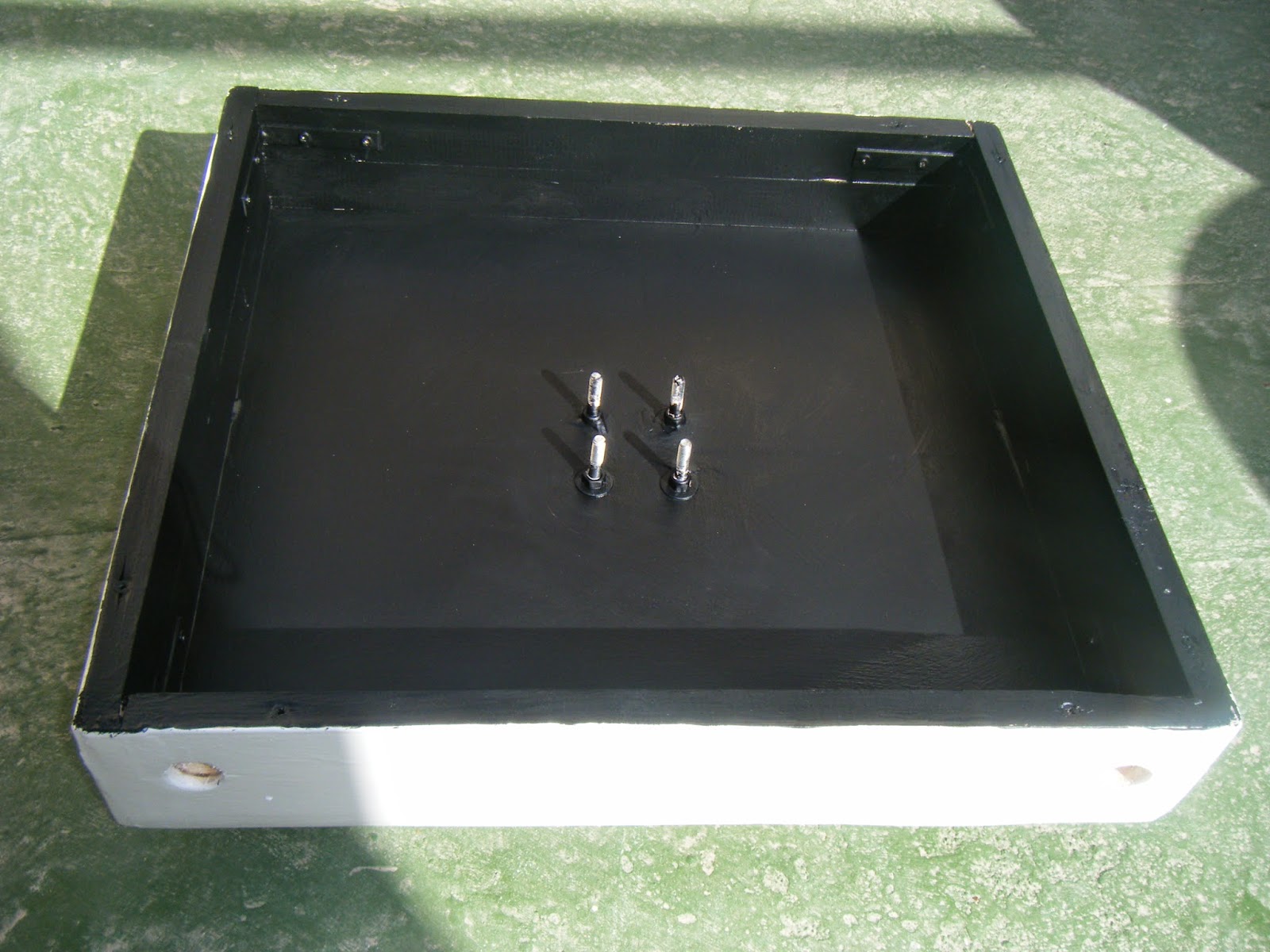 Below is an image of the inside of the solar box, with the 15m copper pipe placed and painted/sprayed matt black as well. 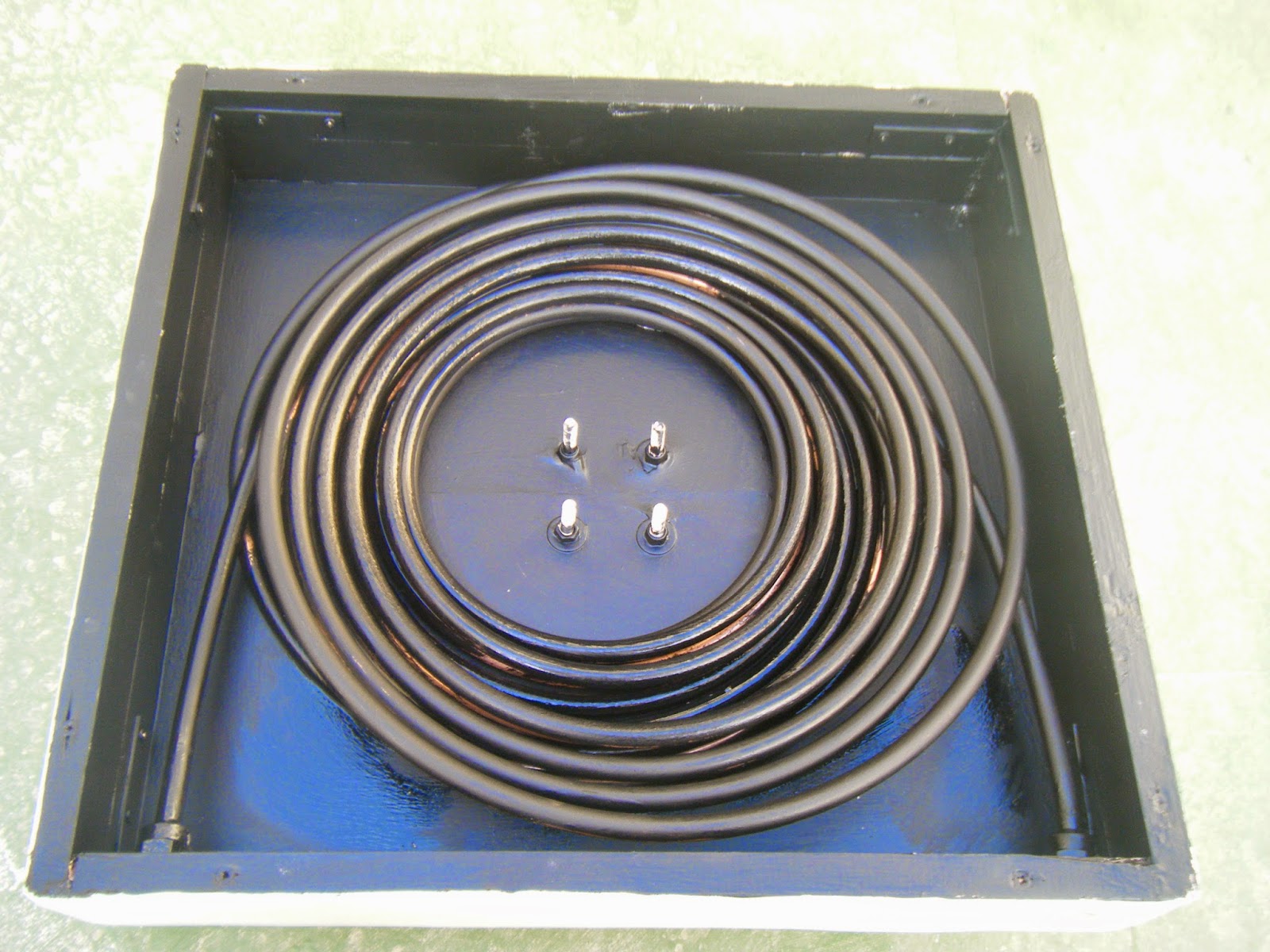 And below the ready solar collector with the glass installed. 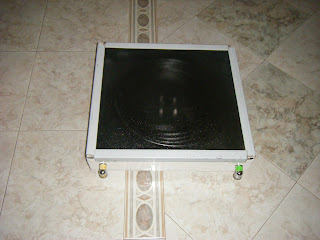 I'll be installing the finished collector and water pool soon. I'll be posting some performance data once it's up and running.
Posted by Brian Ellul at 5/07/2015 02:53:00 PM 1 comment:

I'm writing this post because some time ago a relative of mine requested a quote from a local RE supplier and this company recommended that he should install the panels using micro-inverters. The supplier remarked that 'this is the new way of installing panels.' WHAT? True, the technology may be newer than central inverters but that doesn't mean that the central inverters installation is a thing of the past or that micro-inverters are better than central inverters. Both installation types have their pluses and minuses as I'll detail below.
The price for the whole system using micro-inverters went up quite a bit! The strange thing is that the quote was issued after a site visit and it was confirmed that there are NO SHADING issues. So why use micro inverters when shading is not an issue?
Well, quite difficult to answer on behalf of the supplier; however I would like to make these observations.

1) If all panels are facing the same South direction, then one MPPT controller would be enough. Why spend money to purchase an MPPT controller for each panel? Agreed that although the panels would all be rated the same (Power, Voltage, Current), their performance (including their internal resistance) may vary between them, BUT by how much? I don't think that mismatch in panels is an issue in this case simply because most probably the panels would have come from the same manufacturer/batch. Normally the panels may vary +- by a small percentage and that's all, nothing to bother with regards to their overall performance.

2) If not all panels are facing the same direction, but maybe they are split in half, then there are central inverters with 2 or 3 MPPT controllers built in. These will facilitate the installation of the 2 or 3 sets of panels and therefore individual inverters are not needed.

3) If the panels are scattered on the roof all with different directions, then yes I agree that individual MPPT controllers will be needed to optimize the extracted energy from the panels.

4) If there are shading issues, i.e. during a long time of the day, several panels are covered, then again, individual MPPT controllers might be required.

6) Suppliers and Manufacturers are quoting a better yield from the system, between 5-20%.
Let's take an example here - a 2KW system consisting of 9 panels at 230W each (my actual installation size).

In my opinion, if there are no shading issues as mentioned above, and there is more space on the roof, I'd prefer to add an extra panel or two to make up for the decreased efficiency (which is claimed) than adding the micro-inverters. A panel comes with a 25-year warranty and from my experience, they do stick with their warranty claims. I own a couple of 10 year old panels and they still produce power as new.

7) Another issue which is mentioned with regards Central Inverter vs. Micro-Inverter  is that micro-inverters are more scalable than Central inverters. If you want to increase the size of the system, it will be just a matter of adding more panels together with their micro inverters. This is a good point, however on installing the system, the central inverter can be purchased to support more panels from day. Thus it will be just a matter of adding the panels once the upgrade is performed. In this case, the upgrade will be cheaper because only the panels will need to be purchased albeit a higher initial cost of the larger central inverter. The upgrade is something which is considered from day 1 due to roof space and panels' location and it's not something which is dreamed of! Therefore the central inverter can be sized accordingly from day 1 to accommodate any upgrade which will happen in the future.

8) Central inverters can be considered as a Single point of failure. Although this is true, in my opinion it still does not justify the use of micro-inverters. A central inverter can be easily replaced since it would have been installed in a better location while micro inverters are all located under the panels. Accessibility of these micro inverters may be a problem to locate.

9) Central inverters come with a standard 5-7 year warranty which can be extended to 10-12 years while micro inverters come with a 20-25 year warranty. Well, I still have to see a micro inverter which has been on the field for 20 years! These warranty claims are based on laboratory tests and predictions while central inverters have been in the field from the time that grid-tie systems have started to mushroom across the world.

To conclude, I always follow the K.I.S.S. (Keep it Simple Stupid) principle. Why add all those electronic devices when they may be not needed (no shading and same orientation)? I think that only time will prove which is the best and therefore, most reliable technology. The central inverters already proved themselves, so we'll just have to wait for the micro-inverters to prove themselves...


On the 7th of November 2014, Malta was hit by a gale force storm. It hit the island in the early afternoon and although lasting for only a few hours, it caused a lot of damage across the island, from trees being uprooted to power towers and walls collapsing.

My wind turbine was not spared!
Below are the photos of the damage suffered. One of the blades got stuck due to the strong wind. 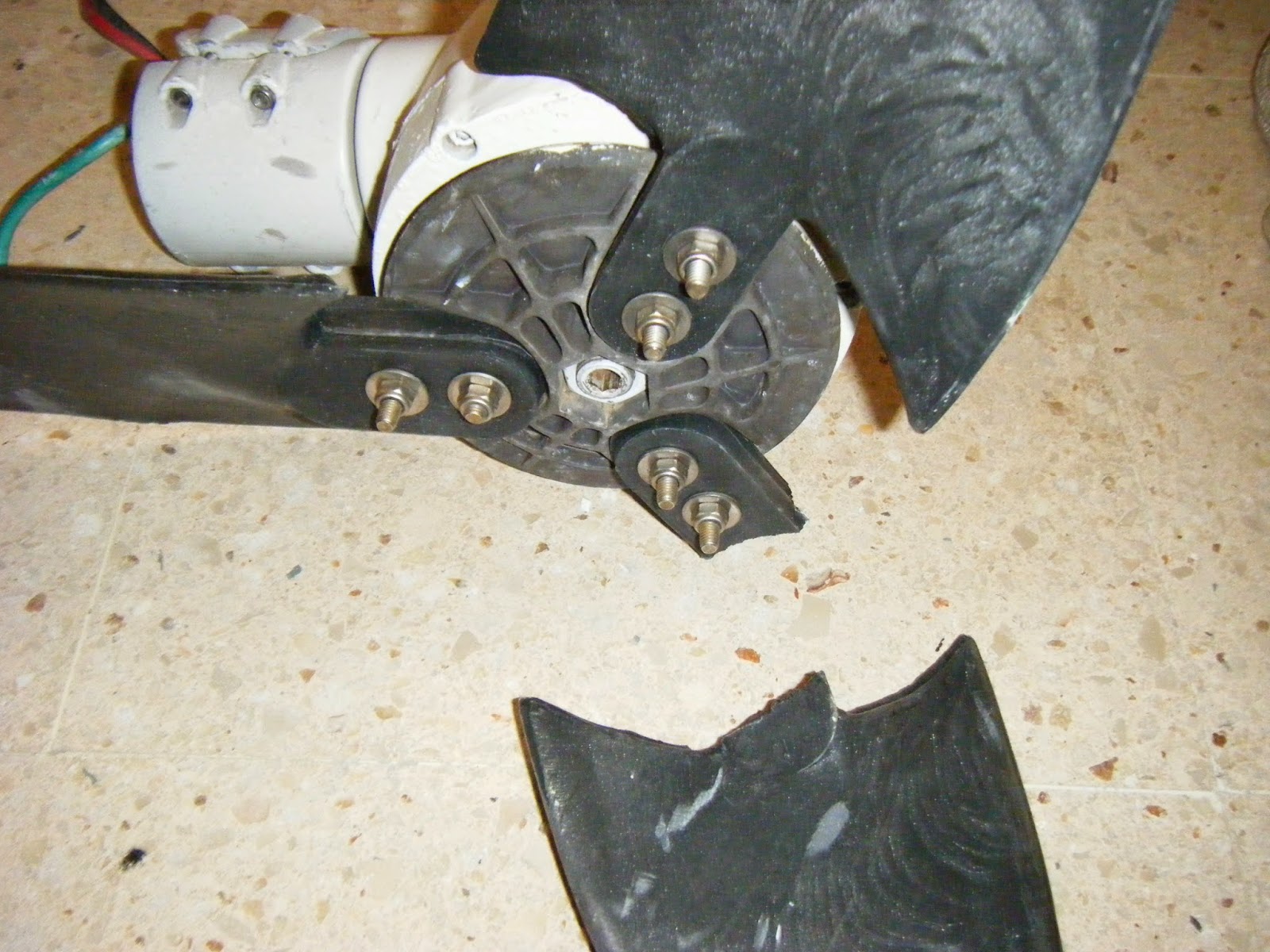 The photo below is displaying one of the guy anchoring support which got detached from the building. It was fixed to the stone building using two 8mm stainless steel raw bolts.﻿ 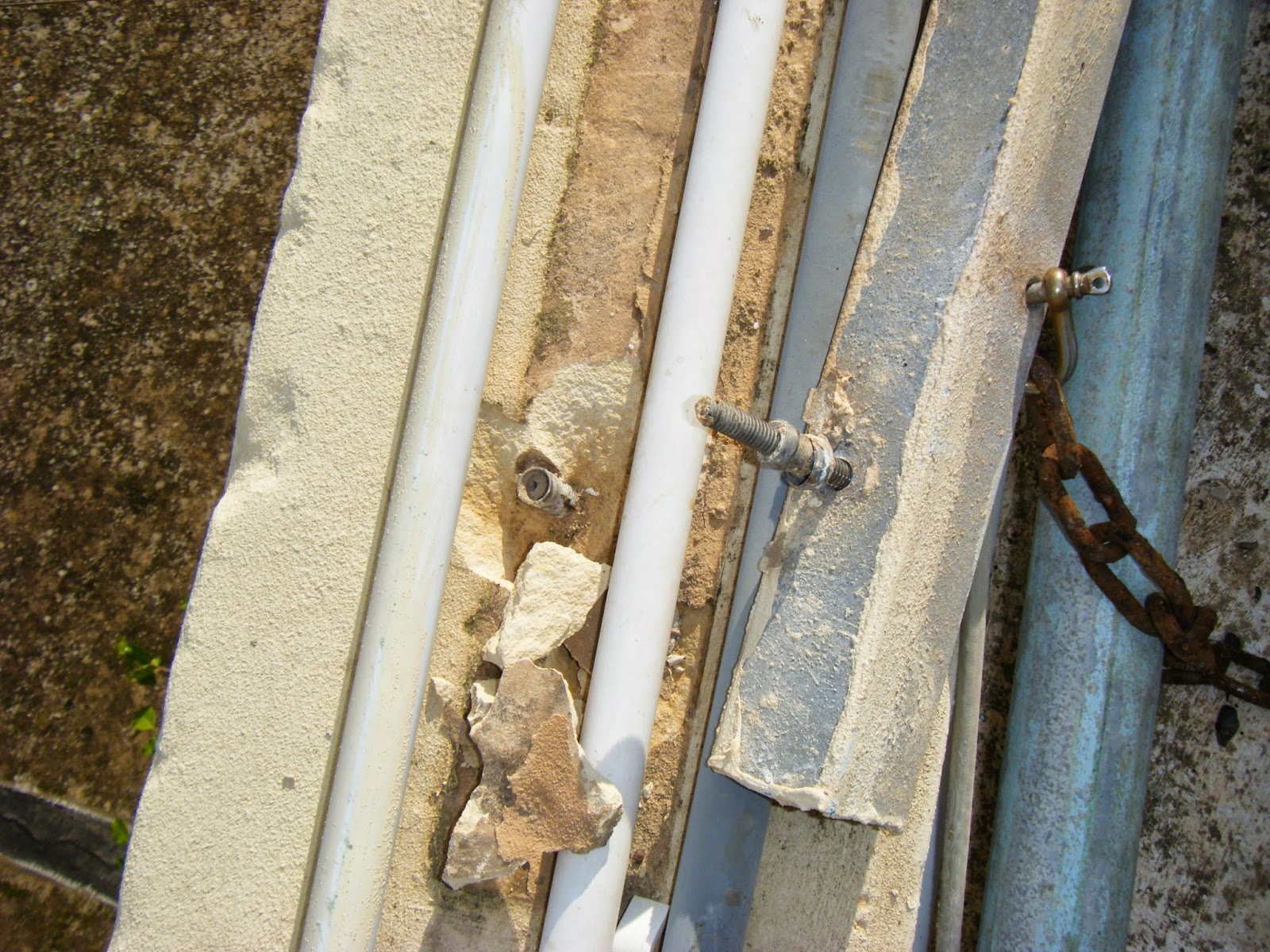 Once one of the guy wires got loose, the stress on the turbine pipe was too much and it collapsed! 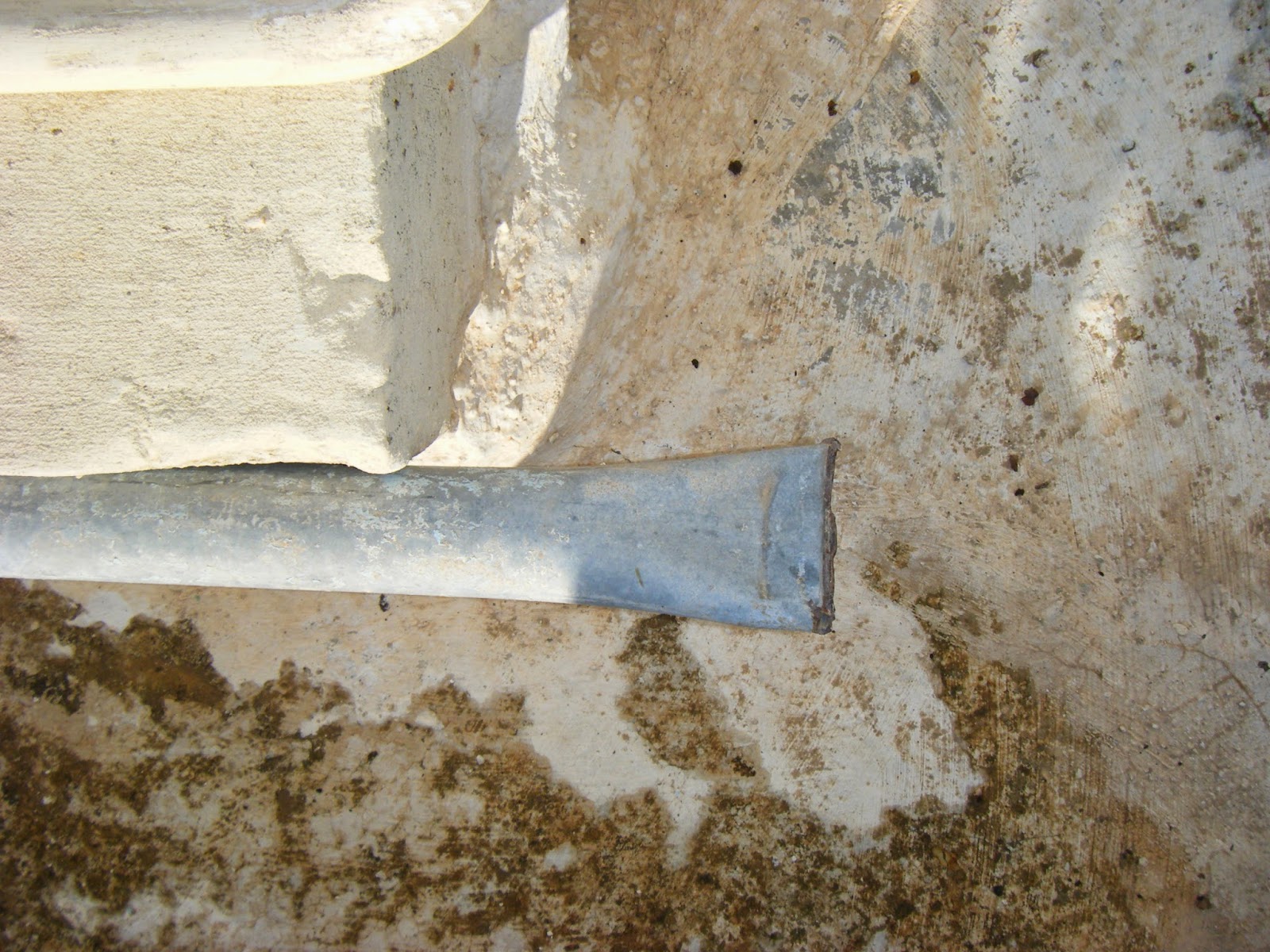 After this, I decided that for now I won't be using the wind turbine. I will first build a stronger tower relying less on guy wires since this accident already happened another time!

I'll be posting the details of the new turbine tower once it's ready. I'll definitely build another tower because I have just bought a new set of blades from emarine - Silentwind Silent Air X Air 30 Replacement Power Blades. I obviously haven't tried them yet but these blades seem very promising!