My Air-X stopped working during a winter storm, wind > Force 9+ sometime in February 2011.
After taking the turbine down for inspection, I found out that both the circuit board and air-x stator where fried. This was my third time that the circuit board failed (in 5 years) and the first time the stator got fried. I sent for quotes to replace the burnt parts, however thinking about it, I decided that I will not replace the circuit board again. Being the third circuit board replacement was enough for me. I find it really stupid to put electronics high up in the nacelle where maintenance and replacements become a nightmare because of the trouble to lower the turbine. Having some background in electronics, I decided to built a simpler circuit myself, advantages being:
1) Less complex
2) Since I have designed it, it will be fairly easy to diagnose & repair in case of failure.
3) I'll install it somewhere practical instead of in the nacelle 40 + feet up!
4) I'll improve the turbine charging characteristics. My Air-X is a 24v model and it needs quite a bit of wind to start charging my 24v batteries. Having also a separate 12v system, I decided to built a circuit to charge both my 12v and 24v batteries, the circuit itself switching battery banks automatically depending on the turbine output.
In this way I will gain some power when the turbine is spinning enough to charge the 12v battery bank BUT not enough to charge the 24v battery bank.

Before starting working on the circuit, I needed to modify the AIR-X yaw assembly. Three wires come out of the AIR-X, Positive, Negative and Earth (this being also earthed to the nacelle body). Moving the circuit controller away from the nacelle will require the three wild AC phases to be redirected down the tower. I could successfully use both the Positive and Negative wires for two of the phases however I could not use the Earth connection for the third phase since this connection was also connected to the nacelle body, which is eventually also earthed as part of the tower. Besides this problem, the yaw brushes were mounted on the circuit board and therefore I needed a new brush holder assembly.

My neighbour Mario came to the rescue. Being a professional machinist, he modified the yaw assembly (as detailed below) to isolate the bottom Earth connection from the nacelle by adding an extra nylon spacer (white). Please note below the three isolated rings against which the brushes will make contact. 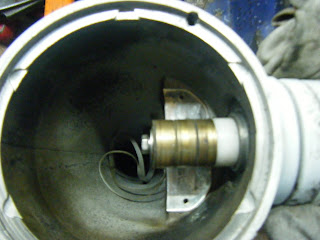 As illustrated below, a new brush holding assembly has been designed and built. The three wild AC phases are connected to each brush and these brushes make contact with the yaw assembly which will transfer the three phase down the tower. 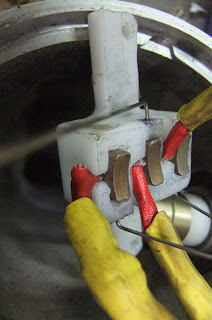 The diagram below shows the fully assembled new AIR-X turbine. 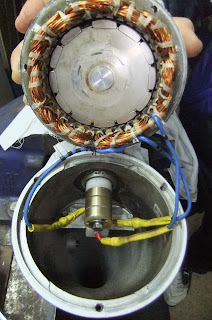 Once the turbine mechanical work was done, I built the new circuit board as displayed below. I'll be posting the circuit diagram and describing how it works in a future post. The circuits are detailed here﻿
The circuit board has been installed in a more practical location, in my garage next to my other equipment! 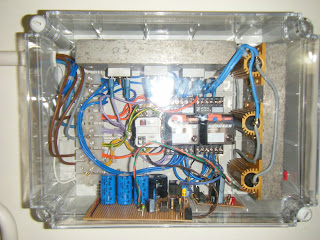