With reference to my first greywater system which I built a year ago, I can post my review and any changes I made to make the system more efficient.

Well, the first system worked but did not work as well as I hoped for. The problem was mainly the amount of time needed for the system to filter the 100 litre storage tank. Before building the system, I had tested and concluded that a 100 litre would be filtered in a couple of hours. The parallelism of 3 streams which I included should have achieved good results however to my disappointment, it was taking far too long to filter and therefore I was wasting water down the drain.

To speed up the filtration process and not rely solely on gravity I installed a pump. The pump will take water from the buffer tank and pressurise it into the sand filters. At least that was my intention until I installed it and switched it on. After 30 seconds, I identified 5-8 leaks and suddenly one of the sand filters exploded, specifically one of the bottom screwable taps came off together with all the sand! Not much to do. It was obvious that the system coundn't handle any pressure. The drain pipes which I originally used were not the heavy-duty type and I never imagined that a tap would just explode outwards. At this stage I had two options:


1)      Fix the exploded filter (strengthen also the other two) and maybe use PVC glue to fasten the taps once and for all. The problem will be that the sand inside will not be replaceable anymore, something which I didn’t want!

I opted for the second option. Although option 1 would have probably worked, I did not want to spend time experimenting with this solution hoping that finally I have no leaks/explosions

The changes were mainly at the filtration stage. Both tanks and all plumbing were OK. I scrapped the sand filters and installed four 10 inch standard water filter housing.

The first filter I’ve installed is just after the storage tank, before feeding the pump. It’s a 25 micron wound filter cartridge and its main purpose is to stop particles entering the pump.


The pump is automatically activated using a float switch installed in the tank and therefore is only active if the tank is full. 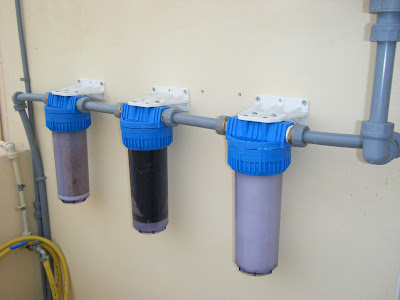 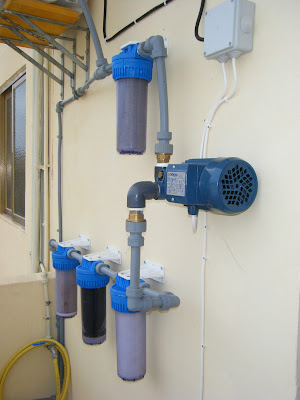 The circuit below has been designed to control the amount of charging applied to my house forklift batteries, while diverting the ‘not used’ power to a small grid-tie inverter. The circuit has been kept simple, minimising cost and making trouble shooting easier in case of problems. 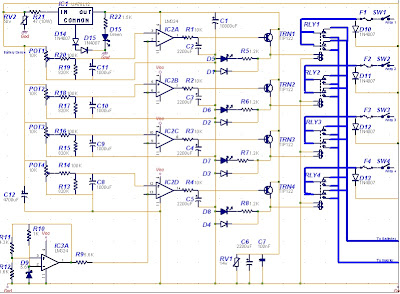 The relays contacts have been connected in a way to automatically (while de-energised) route the power to the batteries. Therefore if the batteries are low, no power is wasted to power the circuit/relays! Once the battery voltage starts rising, the circuit will come on, the relays will energise incrementally (depending on the threshold voltages) and power is redirecting from the batteries to the inverter.


Power from the arrays is fed via diodes D10, D11, D12 & D13 to power the circuit itself. The voltage is fed to IC1 - 7812, a linear voltage regulator via dropping resistor R21. The voltage is stepped down to a stable 12v which is used to power the opamps and relays. R21 was needed because the 7812 maximum input voltage is about 35v. This is a bit low considering the voltage coming in from the panels which can reach even 45v (Uoc). Resistor R21 will reduce the input voltage to 20-30v which is within the regulator input operating voltage. Diodes D14 and D15 will increase the regulator voltage by a further 1.4v thus getting around 13v (no load) from the regulator. The circuit voltage is further smoothed and stabilised by capacitor C1, C6 and C7. Varistor RV1 clamps the maximum voltage to 14v.
The basic principle behind the circuit is simple. Switching is performed by comparing the battery voltage to a fixed reference voltage. Different thresholds have been pre-set thus switching power incrementally at fixed intervals. The four opamps found in the LM324 chip (IC2) have been configured as comparators.


The fixed reference voltage is provided by IC3A. The opamp configuration outputs a very stable 10v through resistor R9. This fixed voltage is applied to the inverting input of IC2 four opamps.
The circuit has got four distinct comparators IC2A, B, C, and D. Since all four are identical, I’ll write only about IC2A. Voltage from the battery is taken via potentiometer POT1 through resistor R20. This voltage is stabilised by resistor R19 and capacitor C11. This will eliminate any sudden voltage fluctuations (which may be caused by sudden huge loads on the batteries or clouds passing over the panels) thus reducing unnecessary switching of the arrays. Further switching stabilisation is also provided at the output of the comparator via resistor R1 and capacitor C2. When the voltage at the non-inverting input (Pin 3 – Connected to the battery sense) is higher that the inverting input (Pin 2 – connected to the reference voltage), the opamp switches on. This will bias the transistor TRN1 which will energise relay RLY1.Once energised; the relay will direct the access power to the grid tie inverter. Diode D1 protects the transistor TRN1 against the relay coil back emf, while LED D5 signals the relay state.


The circuit has been calibrated to divert power at specified battery voltages. These have been set at 27v, 28v, 29, and 30v.