I have removed the internal Air-X circuit board from the turbine nacelle as described here and instead built three simple circuits to convert and connect my 24v Air-X marine turbine to the batteries.
I've called the circuits;
1. Rectifier Circuit
Below is the main three-phase rectifier circuit. B1, B2 and B3 are 35 amps 200v rated bridge rectifiers. I've used three separate bridge rectifiers instead of one three-phase rectifier simply because it was easier to source and it turned out to be cheaper too. The three phases from the turbine is fed into the three rectifiers producing a wild varying DC voltage. This output is connected to either the 12 or 24 battery sets through a relay as described below in the Controller Circuit. 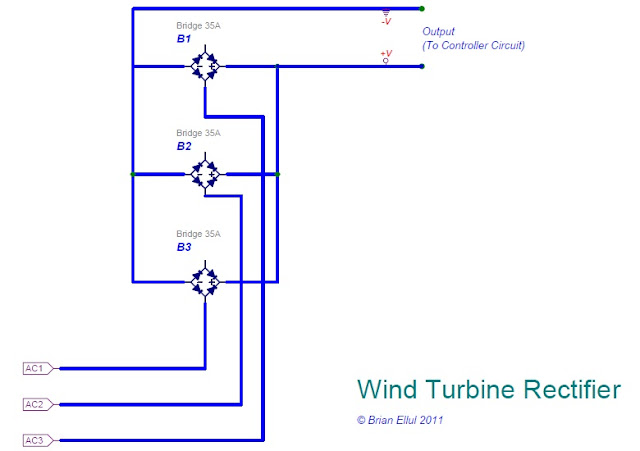 2. Brake Circuit
The braking system I opted for my wind turbine is a manual system.
The original Air-X used it's internal controller to electronically brake the turbine. This used to happen by applying a brute short circuit across the phases without first slowing the turbine down. This sudden braking used to violently shake the turbine, transmitting the vibrations down the turbine tower, adding unnecessary  stresses on the turbine blades and thus increasing the possibility of blade fractures!
I decided to improve the braking system by stopping the turbine in two stages. First a load is applied across the three phase, slowing down the turbine and approximately 10 seconds afterwards, the three phases are shorted out.
With reference to the below circuit, switch S1 is the braking switch. When it's closed, i.e. the brake applied, two things will happen;
1) Relay RL1 is immediately energised and the three phases are shorted out through resistors R3, R4 and R5. These resistors are 1Ω 100W resistors mounted a heat sink. This will slow down the turbine.
2) The 'delay circuit' kicks in. Capacitor C1 starts charging through diode D1 and resistor R1. When it reaches a certain voltage (thus the delay), transistor TR1 is switched on and this in turn will energise relay RL2. Relay RL2 will short out the turbine three phases, thus applying the maximum load which will stall the turbine. Diode D3 will protect TR1 from RL2 back emf. The delay can be increased by increasing R1 and/or C1.

3. Controller Circuit
The below circuit is the new controller I've built for my Air-X. It's much simpler than the original internal regulator, however I now have the added benefit of charging 12v batteries in low wind conditions. 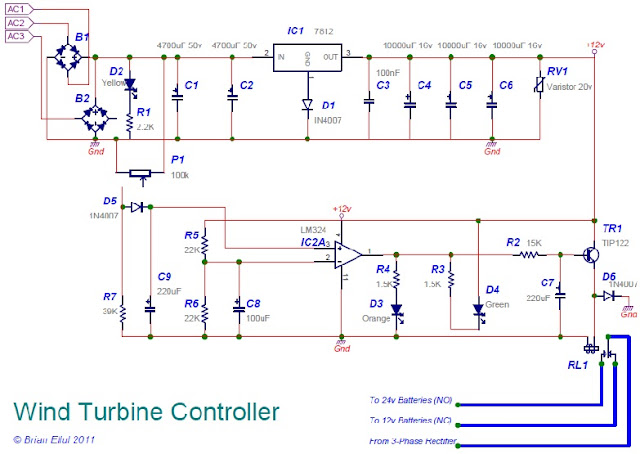 The three phase from the turbine is rectified by two bridge rectifiers B1 and B2. These are 1 amp rated rectifiers and their output is used to;
1) Power the circuit itself, including the controlling relay. No external supply is needed to power the controller. I will just use 0 watts in no wind conditions.
2) Used as a reference voltage to control the controller (relay) output.
Capacitors C1 and C2 provide smoothing to the rectifiers output, while LED D2 acts as a quick reference to indicate the current turbine power strength. The higher the turbine spins, the brighter the LED.
The varying DC voltage is fed to a 12v voltage regulator IC1 and it's output is further smoothed by these large capacitors; C3, C4, C5 and C6. These capacitors act as reservoirs to power the circuit. They are needed to reduce any voltage fluctuations due to fast changing wind conditions.
IC2 is the popular quad opamp LM324. In this case, I'm using only one of the opamps in a comparator mode.
Pin 2 is held fixed at 6v (half the regulated supply voltage) by the voltage divider resistors R5 and R6. Capacitor C8 helps in keeping this reference voltage constant.
On the other hand, Pin 3 is fed from the turbine unregulated output through potentiometer P1, R7 and D5. This varying voltage is smoothed by capacitor C9 which also act as a reservoir to eliminate any fast-changing wind conditions.
When pin 3 is lower than pin 2, i.e. in low wind conditions, the output from the opamp is off, TR1 is off and relay RL1 is De-energised and therefore the output from the turbine connected to the 12v batteries.
When pin 3 goes higher than pin 2, i.e. in high wind conditions, the output from the opamp is on, TR1 is on and relay RL1 is energised and therefore the output from the turbine connected to the 24v batteries.
Potentiometer P1 is used to adjust the threshold voltage at which the turbine is connected to either the 12v or 24v batteries.
LEDs D3 and D4 indicate whether the turbine is charging the 12v or 24v battery sets. D3 is on when the opamp is on i.e. in the 24v mode while the green LED is on when charging the 12v batteries.

Completed circuits
The three above circuits have all been housed into a plastic box as shown below. 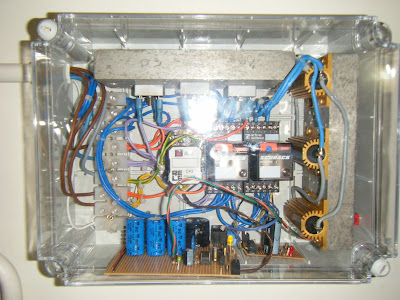