The Controller is fairly easy to setup and it comes with a comprehensive manual. It's very difficult to get stuck with the installation or wrongly configure the controller.

I installed a dump load to divert excessive power. I still have to find or build an aluminium box for the diversion load heater, in fact right now it's just hanging underneath the controller.  The dump load can easily handle 12 amp at 12v. 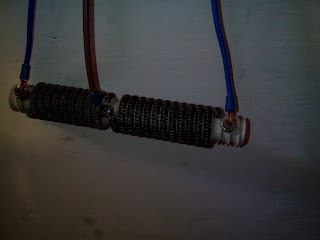 The photo below is displaying the 12v Control box and next to it the charge controller. 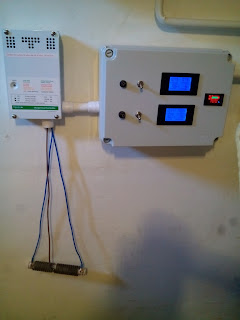 The dump load has been enclosed in a box... 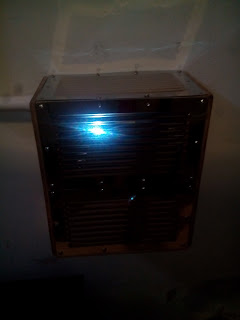 *2: NEDC stands for New European Driving Cycle. The values of electric energy consumption and electric range are based on UN R101. These values vary depending on driving style, road and traffic conditions, ambient temperature, use of air conditioners and so forth.

I'm gathering statistics on my iMiev on a monthly basis and can confirm that yes, using the A/C or Heater will greatly effect the electric range. 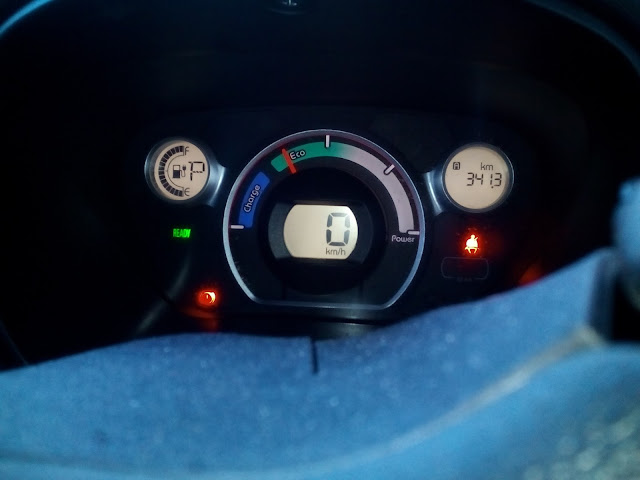 The photo above was taken on starting the car and with the A/C on. The car was standstill. As can be clearly seen, the Power meter was not on Zero but the needle moved to 'Eco' which means that power was being taken from the traction battery. The consumption is not that high but normally without any A/C switched on, and the needle in that position, I'll be driving the car at 40KM/Hr on a flat surface!
Therefore it is clearly obvious that cooling/heating does consume power from the battery, thus reducing the electric range.
I'm not fanatic about the range I manage to achieve, I'm more interested in driving in comfort.
Posted by Brian Ellul at 7/24/2017 03:34:00 PM No comments:

If you go through my blog, you'll find out that I have all the house batteries and almost all power electronics installed in my garage (which is physically linked to my house). 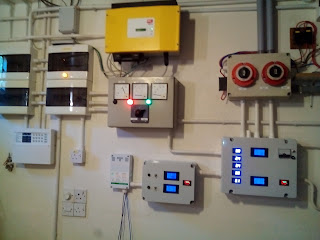 The photo above is showing part of my setup.
All of the above can catch fire!
Everything is fully fused as it should be and all wires are properly sized to carry the estimated current, however this does not mean that accidents cannot occur... an electronic component malfunctions and the fuse does not blow or blows late after a copper wire catches fire.

To put my mind at rest I installed two fire extinguishers in the garage.
Both can be safely be used on electricity although I'll prefer the CO2. Having said that in large open spaces, the CO2 may not be enough to extinguish the fire and that's why complimenting with a dry powder extinguisher is a good idea. 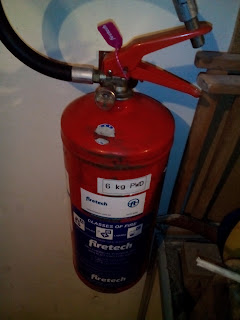 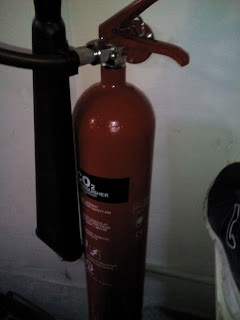 Basic technical information.
Basically, lead acid batteries are made up of lead and lead dioxide plates immersed in an electrolyte or sulfuric acid.
During normal use the sulfuric acid reacts with the lead dioxides plates to generate electricity (i.e. power) and in the process a thin layer of solid lead sulfate crystals are deposited on the plates. If inspected, these crystals will cover the battery plates and looks white as shown below. This hardened lead sulfate is an unwanted product of this chemical reaction and is called sulfation, one of the main reasons why lead acid batteries start loosing capacity and eventually become unable to hold any charge and need to be thrown away. This happens because these large crystals clog the pores of the lead dioxide active material and therefore charging becomes impossible.
During charging, the reverse process occurs and the lead sulfate is converted back to lead dioxide and sulfuric acid, restoring the battery to it's pre-discharge state. Unfortunately, this charging process is not perfect and in fact with every charging/discharging cycle, more sulfate is deposited on the plates and never removed, thus the battery loosing slowly it's original capacity. That's why a battery is also rated on the number of cycles it can sustain. A cycle is considered to be a battery from a charged state, discharged and charged again. Expensive fork lift batteries are rated to sustain > 3000 cycles i.e. if the battery is charged/discharged daily, the battery can survive 8+ years with very little loss of capacity!
A battery desulfator is a device which will clean the batteries internal plates, i.e. it's able to remove the hardened crystals (which were not previously removed by the normal charging process) and restore the battery to a better state, holding more charge and capacity. A good desulfator uses pulse frequency to dissolve these crystals.

Deep Cycle Batteries are expensive! In fact I preferred to spend extra Euros on the Desulfators in the hope that they will maintain my batteries in better shape and prolong their useful life.

Installation
I opted for these Battery Desulfators from infinitumstore. I like their design, fully enclosed/sealed making them ideal to sit next to batteries. Also these devices use Amplitude Modulated Pulses at the resonance frequency of the crystals to shatter the covalent bonds that hold it together.

The image below is showing the installation details. 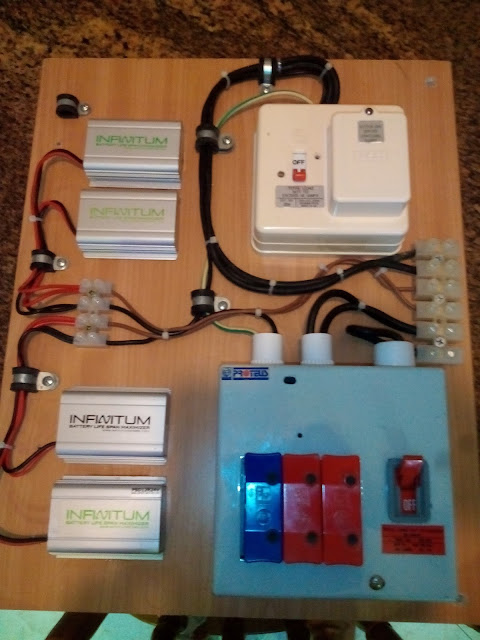 The desulfators have been installed just against the outside of the battery box. 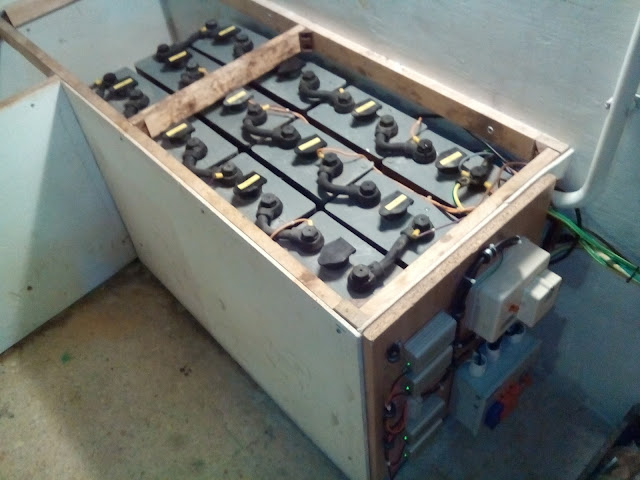 Introduction
On upgrading my off-grid 24v system, I added more Photo-Voltaic Panels - 900W in total (150w x 6). I decided to sell this all this power instead of storing it into the batteries. I purchased two small grid-tie inverters - 500W peak  each and connected them to the solar panels and grid. They worked well however I noticed that the inverters were getting pretty warm! The inverters are installed in the garage which is South facing. Therefore the garage is exposed to long periods of direct sunlight, raising the room temperature significantly. I measured the temperature in the afternoon and the mercury hit 35 °C. This was forcing the inverters fan to run continuously besides that the inverters were still getting pretty warm.
I needed to find a way to keep the inverters cooler. One way to do this was to water cool them!
This required a lot of preparation because I needed to have a cold water supply next to the inverters, something which was not readily available.  The water cooling supply has been taken from the roof tank (2 stores higher) and thanks to gravity, I did not need a circulation pump to get the water circulating the inverters. The water after passing through the inverter heat-sinks is then dumped back in the well, thus there is no water wastage. The house water well pump would then switch on occasionally automatically (depending on the roof tank water level) and new cold water is pumped from the well to the tank.
I have this system running for the past month now and must say that I'm really satisfied with it's performance. The main objective has been reached in that the inverters are now running much cooler. A cooler inverter (electronics) will translate to a longer working life. The water is being circulated against the heatsink for most of the day but that's OK as long as the inverters are kept cool. 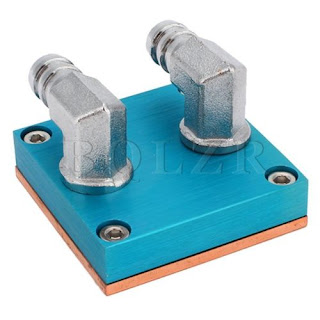 One Thermal switch has been fitted to the heat-sink. I have chosen a switch which will operate at 35 °C and reset at 20 °C. Therefore once the heatsink temperature reaches 35 °C , the thermal switch will turn on... switching on the water circulation solenoid. 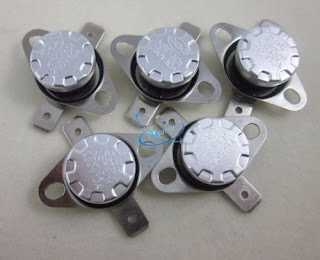 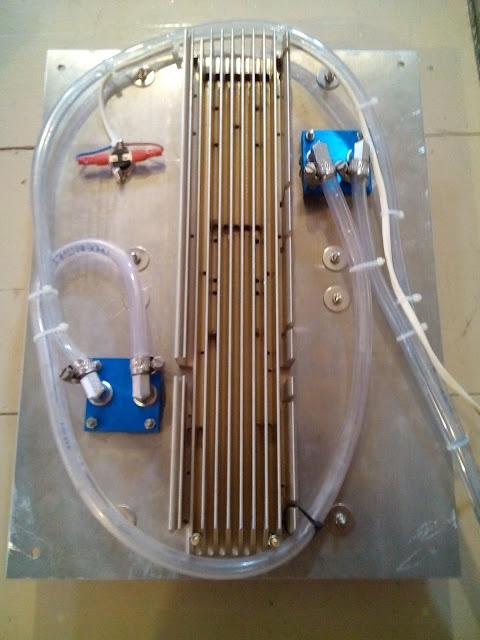 Water flow is controller using a 24v AC solenoid valve. A small transformer has been fitted to power the solenoid since it runs on AC!
An AC solenoid runs cooler than a DC solenoid and that's why it has been chosen. The picture below is showing the front of the aluminium sheet with the grid-tie power inverters installed. 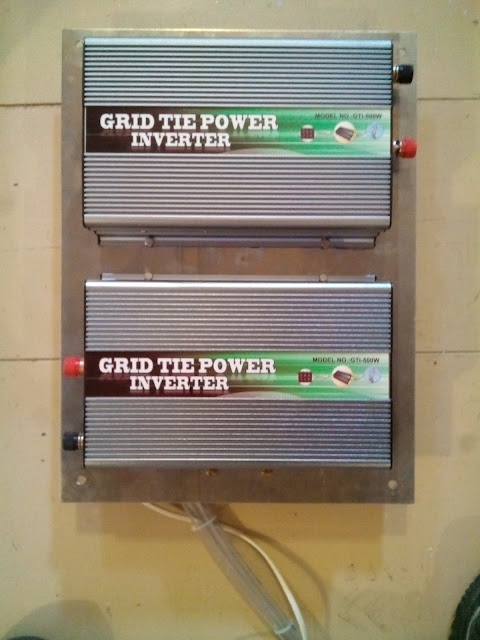 The picture below is showing the inverters installed to the wall. On the left there is a consumer box with 2 separate double pole MCBs and a KW power meter to measure the amount of power generated by these inverters.
On the left of the inverters, there are the water connections, water feed and return showing also the solenoid box at the extreme right. 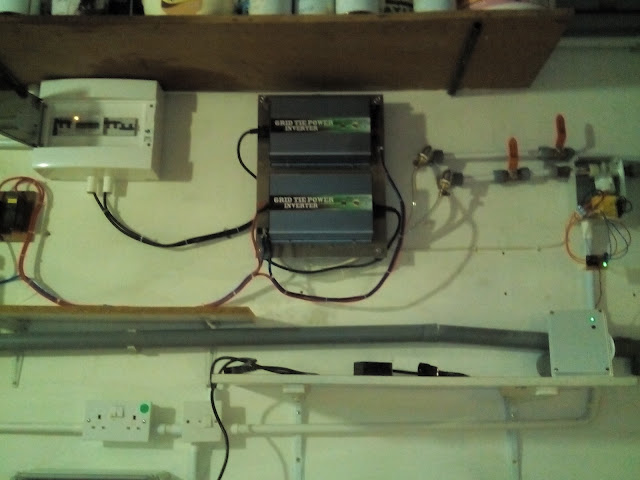 The solenoid box installed. A relay has been used to power the transformer which in turn will power the solenoid valve. 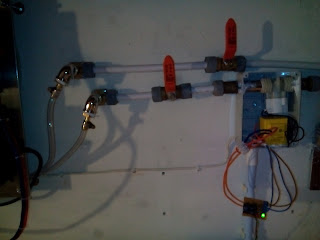 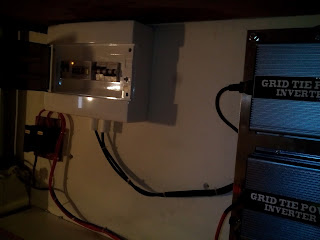 The 12v system batteries have been replaced with 2 x 6v Trojan Batteries rated 225 Amp-Hours at the 20-HR Rate. Details about these batteries can be found on the Trojan website or here

The batteries have been installed in the battery box to
1) Eliminate any accidental contact with the terminals. A short circuit on the terminals can easily promote a fire. If a metal object drops on the terminals, a huge current will pass through it. In a matter of seconds the metal object will get so hot that it would be impossible to remove, it may even weld itself to the terminal blocks. This huge current will cause a huge sudden discharge during which the batteries will get hot and may explode.
2) Deep cycle batteries tend to gas heavily during charging. This gas is highly explosive and a spark can easily ignite the gas causing the batteries to explode. The battery box which I have installed is well vented so this possibility is further reduced. 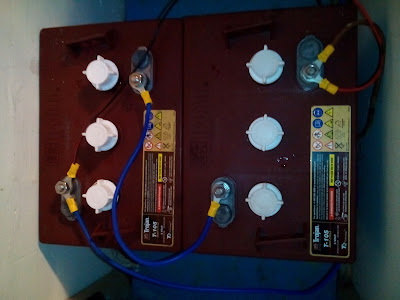 These batteries will be charged using 2 panels.

thus a maximum of 17 amps charging can be reached during the day. A Schneider Xantrex C35 Charge Controller has been installed in 'Diversion Mode' to protect the batteries from overcharging.
Posted by Brian Ellul at 7/10/2017 03:33:00 PM No comments: