My fireplace (located on the ground floor) has been installed in a way that the chimney passes through the main bedroom (located on the first floor) before emerging from the roof. The idea being that heat generated from the chimney pipe will be radiated also in the bedroom before being lost once it reaches outside. I liked the idea however the implementation is very poor and inefficient. In fact, very little heat is actually transferred to the bedroom. The main reason is that the original system relied only on the fact that natural air will flow around the chimney pipe and get heated in the process (through both convection and radiation). My problem is that very little air can flow around the chimney pipe since it has been enclosed in gypsum board. There are only two holes through which air can flow, a 15x15cm hole at the bottom and a 20x20 hole at the top. Cold air will theoretically be sucked from the bottom and get heated as it flows out from the upper hole. In theory that's what is should happen however in practice, very little heat is transferred!

To improve this concept, I have installed a fan at the bottom opening which sucks in cold air and pushes it against the chimney pipe, while four smaller fans installed at the top opening will push the warm air out from the chimney enclosure into the bedroom.

The designed circuit is based on the popular quad opamp LM324. It will control a small number of fans, these switching on depending on temperature, i.e. once the chimney temperature rises beyond a pre-defined threshold, the fans will be powered on (slow speed). Once a second pre-defined threshold is reached, the fans are powered fully on. This two-step switching has been implemented because these fans are installed in a bedroom and it's very undesirable to have a number of fans fully blowing at night. Also, the chimney will eventually get cooler at night because the fire will diminish and therefore it's useless having the fans blowing at full speed.
The circuit is powered by a 12v supply. Supply regulation is not critical. In my case, I've used the house 12v which I have wired around the house. I'm getting this supply from a 12v battery, charged by a solar panel. More details about the off-grid system can be found here. Capacitors C2 and C3 have been included to stabilise the supply rail.
I've used one of the opamps (IC1D) to generate a very stable 10v supply. This 10v is used as a reference voltage for the other two comparators.
The temperature is measured using a 47K (ntc) thermistor. An ntc thermistor will decrease it's resistance as the temperature rises.
The two comparators are IC1B and IC1C, both are identically wired with preset P1 setting the temperature (reference voltage) for IC1B and preset P2 setting the temperature (reference voltage) for IC1C. This reference voltage is applied to the opamps Inverting input.
The non-inverting input is fed through resistors R9 and thermistor R10. As the temperature rises, the voltage at this junction will increase and therefore the voltage at the opamp's non-inverting input will increase.
Opamps IC1B and IC1C outputs are buffered using transistors TR1 and TR2 respectively. These provide enough current gain to power the fans. Resistor R8 has been specifically choosen to power the fans at a lower speed. Please note that both transistors have to be placed on a small heatsink. Although the transistors will operate only as switches, i.e. either fully off or fully on, they will get pretty hot with as little as 0.5amps of current. 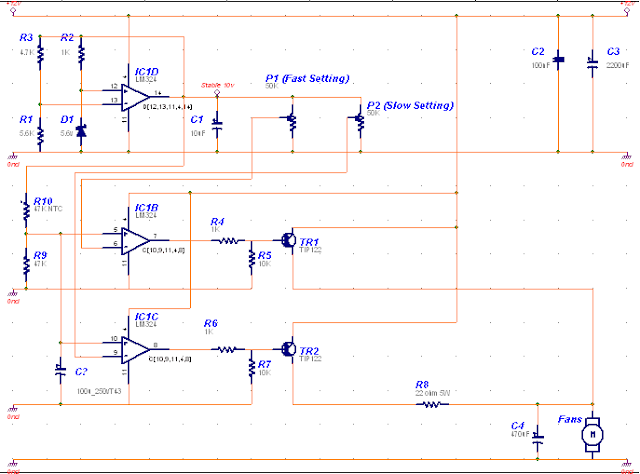 The below image is displaying the finished circuit board built on a small vero board. The circuit will be installed in a 6x3 conduit box. 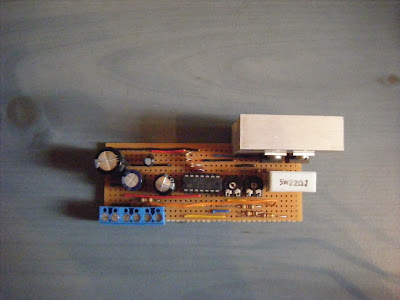 The image below is showing the connections and major components of the circuit.
﻿

The image below is showing the location/conduit box into which the circuit has been placed. I have added an external switch to turn off the circuit during the warm months. 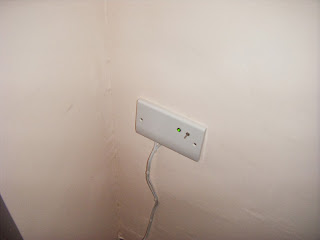 The next two images are showing the bottom and top holes into which the fans have been installed. The chimney pipe is installed in the corner of the room enclosed with gypsum boards. The bottom fan will suck cold air and push it into the chimney enclosure. The sucked in air will heat up as it passes next to the hot chimney pipe and will eventually be blown out from the top fans into the room, thus heating up the room. 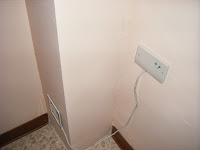 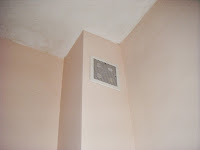