This article will describe a multi-stage filtration system I built, to collect, clean and re-use water dumped from the washing machine. This water is eventually used as flushing water for a toilet.

The below flowchart lists the main steps I adopted to achieve my goal.

1. The washing machine performs a spin cycle during which water is dumped off.

2. Water from the washing machine is first collected into a buffer tank. The size of the selected tank is 100 litres. This capacity is more than enough to temporarily store a full washing cycle. This tanks serves two purposes;
3. From the buffer tank, water is passed through sand filters. The sand filters will clean and clear the water. I opted for three parallel filters to speed up the filtration process since the sand filters although doing a great job perform it very slowly!.

4. Water from the sand filters is passed through a 'fine grain' filter during which a small dose of bleach is added.

5. The water is dumped to a 500 litres storage tank. A toilet flushing is connected/fed from this tank.

One key feature of this system is that water flows between stages thanks to gravity! I have arranged the system in such a way as to eliminate the need for pumps which would have added cost to the system besides complexity and electricity consumption.

Since a picture is worth a thousand words, I have taken some pictures of my installation to better illustrate the system.

The below image is a photo of one of the sand filters laid on the floor. It's length is approximately 1 meter and is fully packed by fine grain sand. I've used 110mm drain pipes to construct the body of the filter, blocked at each end by screwable taps. 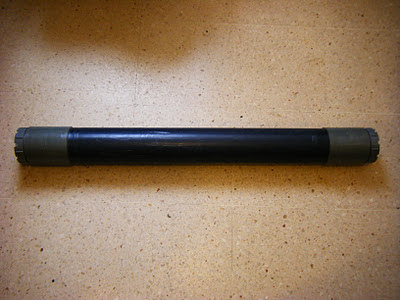 The photo below is showing an end connector of the sand filter. I drilled the 110 tap and installed a further 15mm adaptor which will be used to connect the filter to the rest of the system. 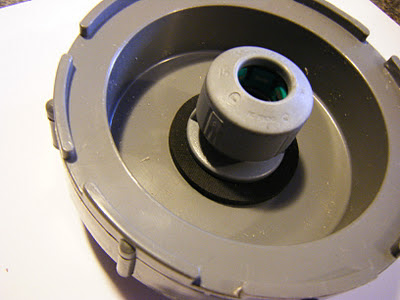 And this photo is showing the underneath of the TOP tap. 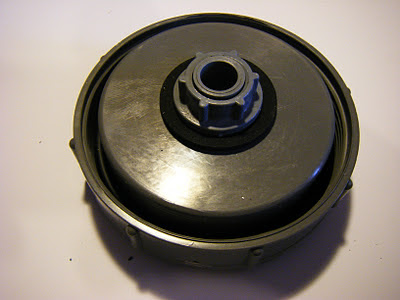 This is the photo of one of the BOTTOM taps. I have covered the outlet with a thick cloth (similar to what I did inside the buffer tank) to restrict sand getting out from the bottom of the filter. It turned yellow because of the glue which I used when it settled. 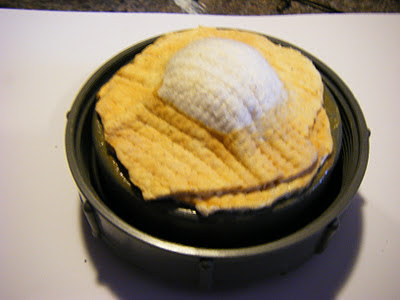 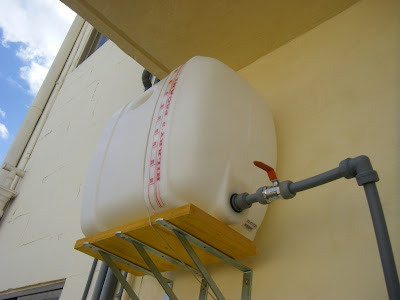 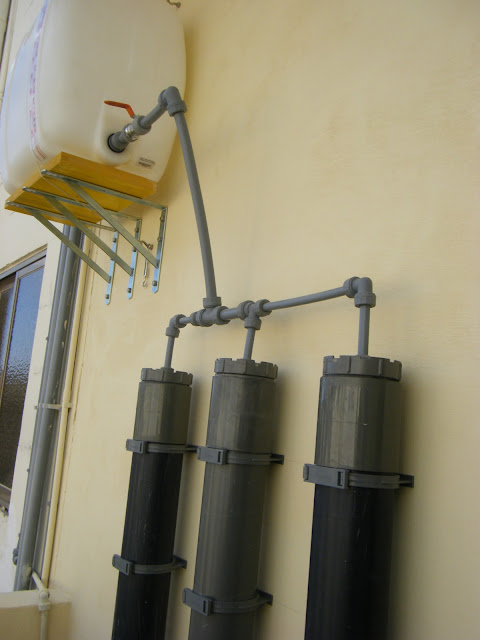 Displaying the three sand filters paralleled fed from the buffer tank and in turn feeding the 'fine' filter. This below photo is the 'fine' filter which further cleans the water. I have placed bleach tablets inside this filter before feding the 500 litres storage tank. 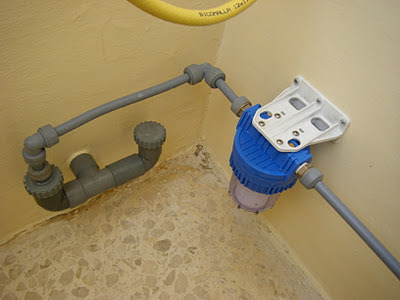 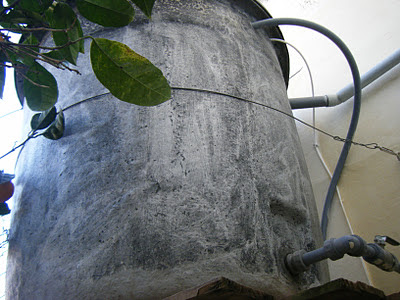 The toilet flushing modification. Switching between greywater and the normal main water is just a matter of closing an angle valve and opening another, as shown below. 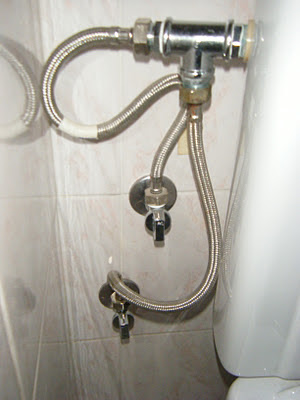 Note. Some parts of this system have been replaced as detailed here.